“Punk rock should mean freedom, like in accepting everything that you like, playing whatever you want, as sloppy as you want, as long as it’s good, and has passion.” Kurt Cobain said it, but Mike Patton lives it.  I had the enormous pleasure of seeing Mondo Cane at  Harvest on Sunday, and I don’t think I’ve ever seen someone perform with quite so much verve, zest, enthusiasm and sheer joy as Mike Patton. I can’t say I’m familiar with Italian pop of any vintage, I don’t speak many words of the language, but I understand freedom and joy when I see them. The sight of twelve violinists holding their instruments up to their faces to sing into the pickups will, I hope, stay with me forever!

As for musical freedom, well Mr Patton is also part of  Mr Bungle, Faith No More, Tomahawk, Fantomas and Peeping Tom, none of which play Spaghetti Western music, as far as I know. He likes all sorts, and he plays what he wants, and it’s good, and has passion. That, to me, is freedom and joy, and it’s not limited to playing music. It’s a “rule to live by” that, if only Kurt himself had managed to follow more closely, maybe he wouldn’t be an”Icon” right now, just a guy who used to be in Nirvana, and now does what he likes. It’s no good dwelling on ifs, buts and maybes, of course, it’s a well-worn path to misery, not joy. 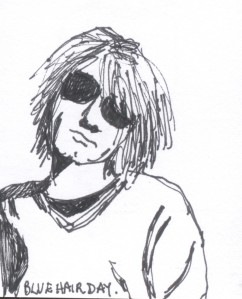 One can, however seek to live freely, creatively and with passion oneself, and that is what I aim for, even though life sometimes gets in the way, and I don’t spend as much time as I’d like on the creative life. My blog helps, though!I suspect it’s more a matter of making, or taking, time than of finding it. And it’s great to be ‘sloppy’ sometimes, but a certain amount of order helps with getting things done – I sometimes spend far to much time searching for some object that I know is here somewhere, under or among the teetering archaeological layers of ongoing projects!

Here’s a poem I wrote much earlier, and although it refers indirectly to “Peace, Love, Empathy”, I think it could equally call for a continuation of “Freedom and Joy” in the world.

I cannot make reparation for you.

What you did is done and can’t be undone.

But the insight that you gained as you gave up

Must not be forgotten

Or wasted with your life.

I want to keep kicking for you

Pick up what you left off

Death be not proud.

These white nerines have taken so long to decide to flower that I don't even remember planting them! I'm happy to see them, though. #gardening #gardenflowers #flowersoftheday #nerines #white #surprise #homegrown
Journey2Motivate