Our Earth is a water planet, luckily for us, because that means we have beaches and rolling surf, all around the surface of the earth.

We had a day out this week with little Matilda, her mum and dad and uncle Alex. These pics all taken on Griffith Island, Port Fairy. The island is a reserve for the Mutton birds that breed there. You can possibly guess from the common name what happened to these birds when colonists “discovered” them. Luckily they didn’t go the way of the Passenger Pigeon, but they still need protection – mainly from foxes and cats these days. 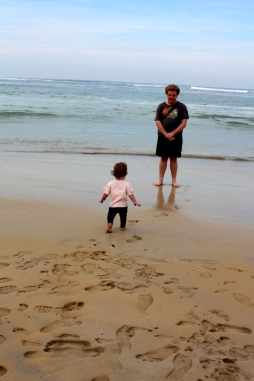 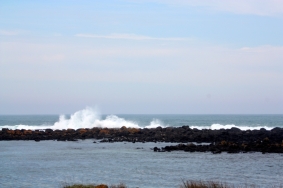 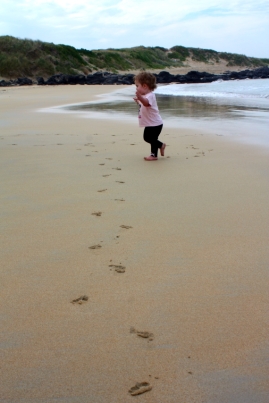 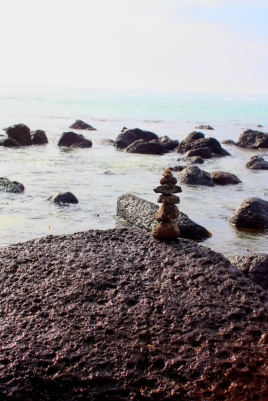 Matilda loved the feeling of sand under her toes, but she wasn’t nearly as keen on the water that kept running after her. I spotted the little cairn that someone had built on a rock near the lighthouse. I’ve no idea how long it has been there, but loved the little human touch on the wild and wet coast.

Back home, back at (volunteer) work, back to the back catalogue for a poem this Friday – appropriately titled, but not actually about where I live (The ocean receded from here many thousands of years ago, before the Grampians were pushed up into a mountain range. ..) No, this is the fantasy region I visit whenever I can, located in the State of Poetry.

The wind blows cold and clear off the ocean.
Pine needles glitter and dance in golden light.
The branches sough and sigh and sing,
The rival of an angels choir.
The water of the bay
Is azure fretted with gold.
Waves run in at the beach,
Where shells lie reflecting the sky;
Pearly opalescence dancing in the foam.

I’ve chosen some photos of the ocean (also from my back catalogue) to illuminate the poem. The first and second are of  the part called “Indian”,  taken at Scarborough Beach in Perth, and the third was taken many years ago on a beach near Rye in Victoria. Those are the younger four of my five kids – all of them are grown-ups now!