Curiously, when I went looking for images for this weeks Photography Challenge, the word in my head was “contrast”,  not “opposites”.  Almost the same, but not quite!

Is “spiky” the opposite of “pretty”? I’ll claim it is with these cacti – and the real ones are opposite of the crochet ones I made for my cactus-loving son, Simon. He grew the real ones when he was a school boy, planted a cactus patch, then left home for uni, leaving his cacti behind…He does come and clean it up when he can, but he lives at the opposite end of Australia from us, so not very often! 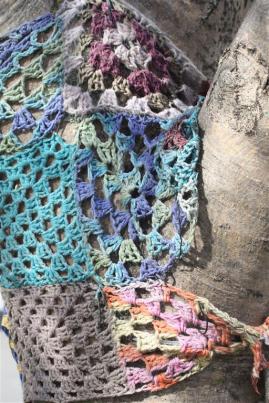 Here’s another “opposite” with crochet – a living tree’s smooth bark in contrast (I did it again!) with the textured yarn. The last pic is of regrowth on a eucalypt after fire went through months earlier – young growth being opposite of the dead burned roadside. We are getting lots of rain this winter (unlike last year), so that roadside is now lushly covered in green growing grasses.