“The creation of something new is not accomplished by the intellect but by the play instinct acting from inner necessity. The creative mind plays with the objects it loves.” 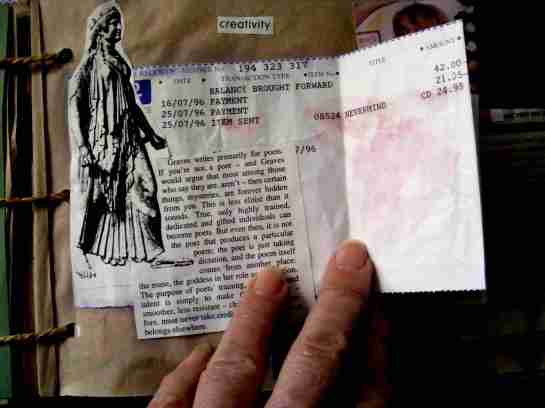 Tucked inside a receipt for Nevermind is a paragraph about the poet Robert Graves, and his ideas on poetry, poets and creativity. The poet, he says, is not responsible for the poem – the poem itself comes from another place. The poet is taking dictation from the goddess as muse, and the poet’s job is to become a clear channel for the poetry to come through. So, says Graves, poets must not take responsibility for their work, since it comes from the goddess herself. I wonder if he would say the same for all forms of creative endeavour?

The child in the old photo is me- aged about two, I think, and running as wild and free as a small child should.

On the reverse of that page, I stuck a timetable from the Big Day Out in Melbourne. I’m not sure of the year, but Coldplay played at 2.30 in the afternoon, so it’s been quite a while…I made a pocket with a photo of a rose (Fragrant Cloud, originally released as Duftwolke) printed on vellum, and tucked a photocopied photo inside. There are tiny images of 3 “Kurt shirts” cut out of the back pages of a music mag glued on the top right hand corner of the timetable – like a postage stamp.