It’s nothing:
A nothing song
That somehow encompasses
The world;
No, my whole world,
My soul, my self.

In this song,
This nothing song,
I see myself
My soul.

I hear mySelf,
My nothing Self
Reflected in your song.

I know my Self,
My nothing Self,
Encoded in your song.

I know myself,
My formless Self,
Reflected in your song.

The first time I heard ‘Something in the Way’, we were driving home from Ararat, with the radio on Triple J. As we crested Cope’s Hill, a song came on I hadn’t heard before. I didn’t really hear it then, either, it was so quiet. Maybe that’s what caught my attention. Bryan switched off the radio before it was back-announced, so I didn’t know who, or what it was.

The second time I heard it, we were on our way home from Philip Island. I recognised it from Cope’s Hill, but I still didn’t know what it was.

Later in the year, I bought a copy of Nirvana Unplugged in New York. I had found my song.

In August 2011, I visited the bridge in Aberdeen Wa, which allegedly inspired the lyric. 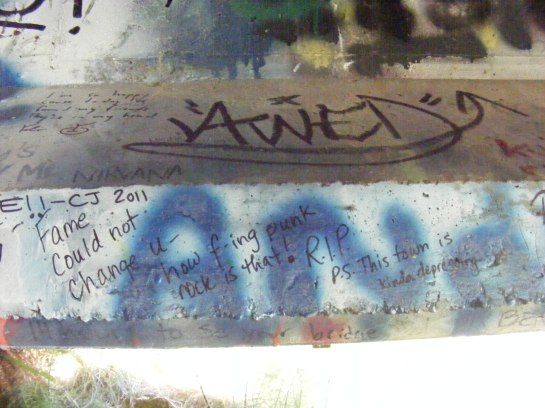 “Something in the Way” still gives me chills, and a sense of formlessness, the Void, emptiness, and great, melancholy joy.